By Akanksha Kar and Lamia Choudhury

“We didn’t reject anyone,” Tahmid Bashir, one of the organizers said of the vendors at the festival, “We wanted to give everyone a free shot. At the end of the day, we wanted to bring the community together.”

Halal is the Arabic word for “permissible.” Halal animals are raised and slaughtered humanely after which the blood is completely drained from the veins of the animal.

Among the fourteen vendors was The Halal Guys, the best known chicken over rice cart in New York. The company that started with one food truck in New York City in 1990 has expanded to 72 locations across the United States today and opened their first location in Farmingdale, LI, last March.

“We estimate that about 30 to 35 percent of our customers actually live on the island…so we decided that this would be a great opportunity to come closer to them and come to Long Island,” Khattab Abuattieh, C.E.O at The Halal Guys (LI) said.

Other well-known vendors in the community like Sam’s Steak and Grill, Holy Cow and Nansense were also present. 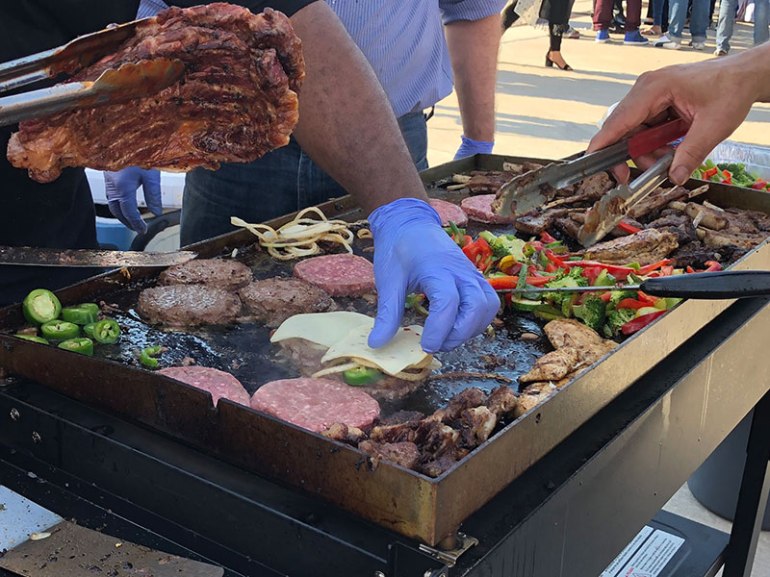 Image: Meats and vegetables cooking on the grill at Holy Cow.

“We want this to happen more often,” Zainab Abid, a resident from Levittown, LI, said.

“It’s nice to see the muslim population has grown and so many vendors are out here supporting the culture and providing halal food.”

The turnout was larger than expected and festival goers complained about the long lines as many vendors  ran out of food.

“We haven’t tried the food yet because the lines are incredibly long so they should probably do something about that because we’ve been here for an hour so far,” Abid said.

Mohammed Rahim, one of the people behind Afghan comfort food- truck, Nansense, was overwhelmed by the lines and said next year they would bring more food and “one or two extra bodies to help out.”

New on the halal food scene was Lollichops, founded by Nada Kasem. For $4, customers could try “lamb chops with a twist” that had been marinated in a secret blend of sweet and savory spices and then grilled.

“Right now we’re a catering company,” Kasem said, “We’re hoping to start a brick and mortar in the next three months within the Queens and Long Island area.”

Festival attendees, like Mehak Salim, made it clear they wanted this to be an annual event.

“I know this is the first halal food festival on Long Island and I’m excited for it to keep going and hopefully it will happen every single year.”

In Bashir’s eyes, the turnout this year was a success and proof that Long Island was overdue for an event like this.

“It’s really an amazing turnout…This is a great example of what we can do when we all put our minds together, efforts together and get the community together. It’s like being at the forefront of a movement.”

About Akanksha Kar 6 Articles
My name is Akanksha Kar and I am from Australia. I love to write, specifically poetry and narratives. I also enjoy fashion, luxury, lifestyle and travel journalism and would like to set up a career path in that direction. So far, my most notable accomplishment was being published in Forbes India, both online and in their magazine as I was a summer intern through the summer of 2018. Apart from that, my interests lie in different fields, such as in business and management, music, adventure sports, travel and succeeding at life :)